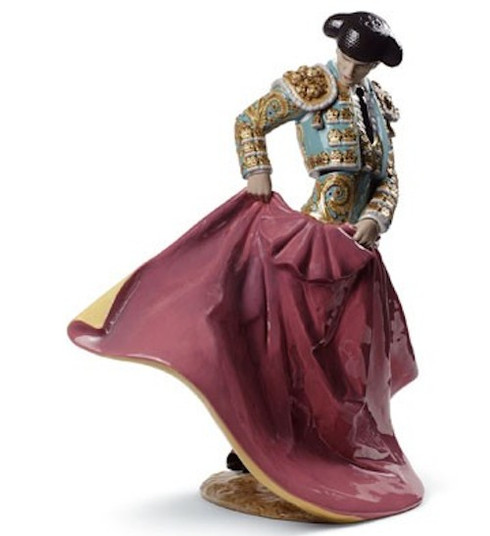 Hover over main image to zoom

FINISH
Glazed porcelain with the sequins and embroidery in golden luster

INSPIRATION
Following the success of the red and white versions of this piece, a new version of the bullfighter has just been released. Once again the focus is on the artistic vision of his costume and pose, as a symbol of such a typical Spanish tradition.

Symbolism
The torero, bullfighting and the whole symbolism that surrounds the myth of the bull is an endless source of inspiration for so many different art forms Lladró pays tribute to bullfighting with a spectacular piece not only in terms of its size but also for its faithful reproduction of all the details of the bullfighter’s costume. The maestro is wearing a green suit with gold adornments, a color reserved for toreros who have taken the alternativa, the ceremony that recognizes them as a fully-fledged bullfighter, and means that they dominate all the different passes and stages in a bullfight.
Holding a cape with his two hands, the torero is performing a "veronica", perhaps the most basic of all movements with the cape, the most classic pass and one that is almost obligatory in the so-called “lances de saludo”, or opening movements. A perfect piece for lovers of bullfighting and of Spanish culture.
Each one of the two earlier versions were sold out in less that two years.

Pure Lladró Style
The wealth of detail of the costume known as traje de luces, or “suit of lights”, with its sequins and embroidery, is achieved thanks to the meticulous ornamentation and the decoration with color pastes and golden luster. A intense green was used to imitate the silk with which the costume is normally made and to further enhance the embroidery.

This product hasn't received any reviews yet. Be the first to review this product!

All prices are in EUR. © 2020 SARL PICTOR. Sitemap | Shopping Cart Software by BigCommerce